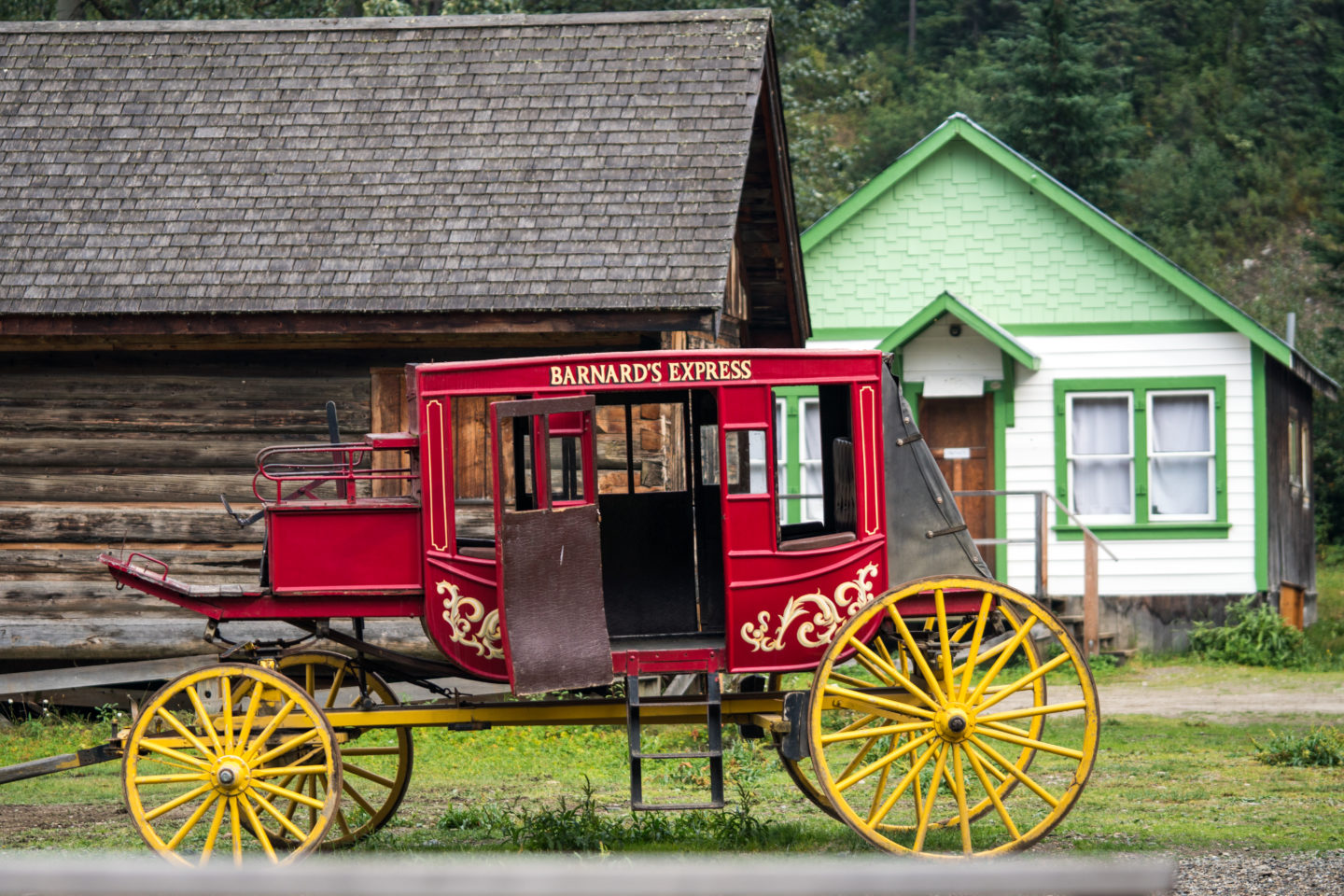 The Gold Rush Trail is bursting at the seams with well-preserved historical and cultural experiences awaiting those with a curious spirit to come and rediscover the secrets of the past and the living culture of today.

Nearly every section of your journey is littered with restored buildings, historical interpretations, museums, glimpses into a lifestyle so vastly different from that which we enjoy today and displays of the diversity of living Indigenous culture.

Rising from the mist of the Fraser River, the walls of Fort Langley National Historic Site stand just as tall today. Discover the roots of this 1827 Hudson’s Bay Company fur trade post where British Columbia was proclaimed. As you enter the walls you will be transported back to what life was like during the 1800s Hudson’s Bay Company fur trading era where French-Canadian traders bartered with coastal First Nations for salmon, cranberries and beaver pelts.

For those looking to begin their historic immersion into the pioneering culture of northern BC, the perfect stop to whet your appetite is the Kilby Historic Site. Nestled near the meeting area of the Harrison and the Fraser Rivers, the Kilby site is a uniquely preserved section of BC’s history. In 1906, the general store located on site first opened its doors and remained this way until 1977. Today you can wander through the store and enjoy 1920s interpreters decked out in their period clothing and discover an intriguing collection of products and store-items from the ’20s and ’30s. The geographic situation of the site itself called for some creativity from the original builders of the day. Due to the fact that the landscape is a natural floodplain, the houses and general store are all raised off the ground using stilts with a network of ramps and boardwalks to connect the small community.

Atop the General Store, visitors are welcome to explore hotel rooms that open the eyes of those who enter to the life of a traveller in the early 20th century. There is history around every corner at the Kilby Historic Site, waiting to reveal its secrets and stories to anyone who is willing to listen.

Further down the road, and further back in time, sits the Yale Historic Site. Once the largest city west of Chicago and north of San Francisco, this small townsite dates back to 1848 when it was first established as a Hudson’s Bay Company trading post. Meander around “tent city” and uncover all that it has to offer, from the general store and saloon to the Chinese Boarding and Bath House, then step into the 1863 St. John the Divine church, originally erected to ‘civilize [unruly] miners’. Spend the night in the Johnny Ward Guest House and enjoy a late morning cup of tea or a snack the next day at the Ward Tea House where you’ll be waited on by servers in period dress. After a good rest, continue exploring by stopping in at the 1870s Creighton House, now home to the historic sites museum and gift shop. Discover the history of the brave Chinese workers who were among the first to arrive in Yale by reading up on the On Lee Chinese Legacy Project, then conclude your visit at the Yale Pioneer Cemetery.

Take a journey through the stunning Bridge River Valley and learn more about the history and culture of the area. The communities of Gold Bridge and Bralorne sprang to life in the area during the Great Depression with the opening of a large gold mine in 1932. This mine, the Bralorne Pioneer, became the richest gold mine in Canadian history, which prompted a boom in the area. Travel through time back and learn more about gold rush history at the Bralorne Pioneer Museum. While in Goldbridge visit the Halymore Heritage Site, the original homesite of Will Haylmore, Deputy Mine Recorder, during the Cariboo Gold Rush. At the site, you can enjoy the open air site, pan for gold, sample homemade ice cream or shop at the local Artisan’s gallery for unique handmade wares.

The Ashcroft Museum is considered one of the best museums located in any BC Village, the museum’s collection includes artifacts that date back to the early 1900s. The displays honour the local Indigenous People, the Chinese community and other pioneers of the area. If you are a history buff, pop in for a visit! The museum is housed in the town’s 1917 red brick post office. The Ashcroft Manor, located right on Highway 1, in the past was a popular roadhouse that provided many services to the gold miners and freighters heading north to the Cariboo goldfields. The roadhouse served as the district’s first courthouse, where the cellar served as the jail. Today, you can visit this historic site, teahouse, gift/antique store and tour the grounds.

Historic Hat Creek is the next logical stop for travellers both then and now. The historic site is located on one of the few accessible parts of the original Cariboo Waggon Road, and the buildings remain standing in the same place as when they were first erected in 1901. Enjoy a guided tour of the original roadhouse, lead by interpreters in-you guessed it-period dress! Wander around the grounds, peek inside restored buildings and barns, or check out the indigenous cultural exhibit. Pan for gold, watch a demo in the woodshop, make a nail with the blacksmith, and so much more. There is no shortage of culture, history, and entertainment at the Historic Hat Creek.

Just north of Historic Hat Creek, Clinton still boasts some original buildings from its inception, the Clinton Museum is located in the original schoolhouse built in 1892, and offers you an abundance of dispays of local history, Indigenous culture and memories of gold rush days.

A little further along the way is the 108 Mile House Heritage Site. Functional from the mid-1800s to 1900s, this site showcases multiple restored buildings, each with its own distinct story to tell. A resting place for history, many significant buildings have been restored and moved to the site in an effort to preserve these buildings instead of allowing them to hide away and be forgotten in their original locations. Uncover the eerie secrets of the 108 roadhouse and decide for yourself whether you believe it or not, or learn more about what it meant to be a student in rural BC during the early 20th century. You’ll soon find out that Tiny Homes are not a new trend when you realize that the 12 by 14 foot trappers cabin was actually a family home during the frigid winter months. There is still plenty left to discover for the eager historian at this culture infused heritage site and museum.

The 150 Mile Schoolhouse is the oldest functional school building in the Cariboo Chilcotin. The schoolhouse was constructed in the 1895 beside the original Cariboo Waggon Road when 150 Mile House was still a thriving hub of commerce, transportation and governance in the area. Today you can visit the schoolhouse in the summer months!

From 150 Mile House you can head to Likely and Horsefly, which both have informative and quaint museums called the Cedar City Museum and the Horsefly Museum respectively. When is the area you must stop and visit, Quesnelle Forks is a hauntingly striking ghost town accessible to the public by a dirt road from Likely, just 9 km/5.5 mi away. Visitors can wander through original log cabins and a heritage graveyard, the only evidence of the past residents who lived here in the late 1800s. There are no entrance fees or employees, no souvenir shops or cafes, just compelling glimpses and fragments of the past. In the early 1860s, gold fever was rampant at the confluence of the Quesnel and Cariboo Rivers. ‘The Forks’ quickly became a rowdy camp with 5,000-plus residents. After the gold seekers moved farther north, the community’s key location made it a major entryway to the goldfields and it remained a busy hub. When the Cariboo Wagon Road was completed in 1865 the community was bypassed, and fell into decline. By the mid-1870s, most of the residents had left, though a thriving community of Chinese prospectors and merchants temporarily remained to support a widely dispersed mining community. If you are really interesting in historic gold mining, stop by the Bullion Pit located on Likely Rd about 5 km/3.1 mi north of Likely.  This gold mine, which operated between the 1870s and 1942, was once the largest hydraulic placer mine in the world. Hydraulic placer mining is the system used to mine that uses large amounts of water to wash away everything, but the gold.

Williams Lake is home to a magnificent log Tourism Discovery Centre, the Museum of the Cariboo Chilcotin, the B.C. Cowboy Hall of Fame. Stop in at the Quesnel & District Museum and Archives which houses a rare collection of artifacts and celebrates Quesnel’s history with a First Nations Exhibit and imagery. Grab a historical walking tour booklet while you are there and follow in the footsteps of our ancestors and discover the unique history of Quesnel.

The next stop in the pursuit of history is the Cottonwood Historic House. One of a handful of remaining roadhouses in British Columbia, this 1860’s structure was erected to offer meals, provisions, and accommodation to miners on their taxing journey. Hang around and absorb the rich culture and history before heading out on the final leg of your journey to Barkerville Historic Town & Park. Barkerville Historic Town & Park is an authentic, unique world-class heritage experience made famous by Billy Barker’s legendary gold strike on Williams Creek triggering a multi-billion dollar industrial revolution that literally built a province. Today, the extraordinary historic town of Barkerville stands as a living testament to BC’s golden beginnings. With its unique streetscape of more than 125 heritage buildings, period displays, satellite museums, restaurants and shops there is still so much to explore.

More Experiences to Enjoy
Share your stories and adventures #goldrushtrail