please take me straight to the guide
Leg 2 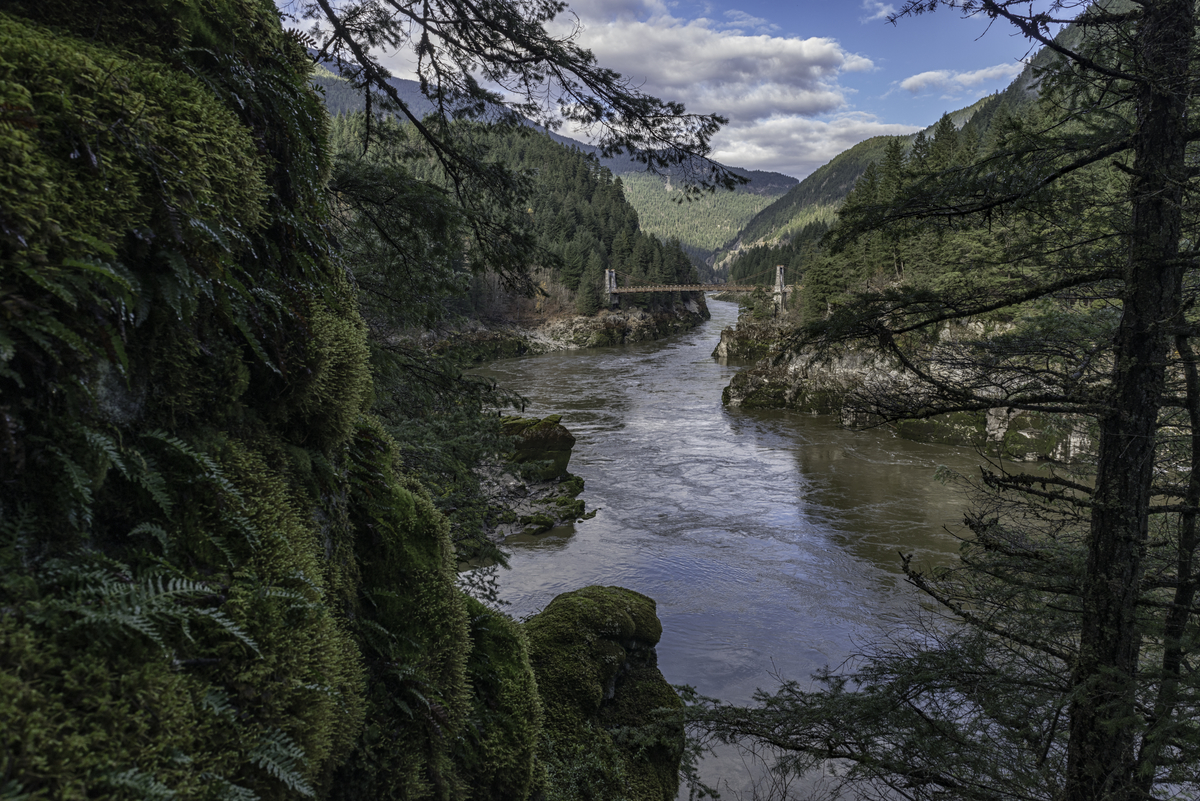 Located with the Traditional Territory of the Sto:lo Nation

Located within the Traditional Territory of the Stó:lō Nation

Located with the Traditional Territory of the Nlaka'pamux Nation

Located within the Traditional Territory of the Nlaka'pamux people

Stops on this Leg of the Gold Rush Trail

Human history in the Fraser Canyon dates back to over 9000 years ago.

Indigenous people have lived along this mighty river since time immemorial, travelling its waters and depending on the river’s abundance for food, transport, and trade, long before Simon Fraser chartered this river. In 1808 Simon Fraser travelled down the Fraser River, through treacherous portions of the river which now bears his name. He described one particular gorge as “the gates of hell,” after he and his men inched their way along its cliffs using rope ladders made by their Indigenous guides. This section of the Fraser River still goes by the name “Hell’s Gate.” The Fraser Gold Rush began in 1858 after gold was discovered on the Thompson River in British Columbia at its confluence with the Nicoamen River a few miles upstream from the Thompson’s confluence with the Fraser River at present-day Lytton. The rush that overtook the region was centred on the Fraser Canyon from around Hope and Yale to Pavilion and Fountain, just north of Lillooet. In response to the massive influx of miners, many prepared to disrespect local customers or even kill to get to the gold, the Nlaka’pamux people began to fight back beginning the Canyon War of 1858. A blockade of the river by the Nlaka’pamux Nation forced miners off the Fraser River Banks and, thanks to the peace negotiations by Chief Spintlum, an all-out war was avoided. Though the rush was largely over by 1927, miners from the boom spread out and found a sequence of other goldfields throughout the British Columbia Interior and North, most famously the Cariboo Gold Rush. The major influx of prospectors in the Fraser Canyon has forever shaped the regions’ culture, landscapes and collective memory. 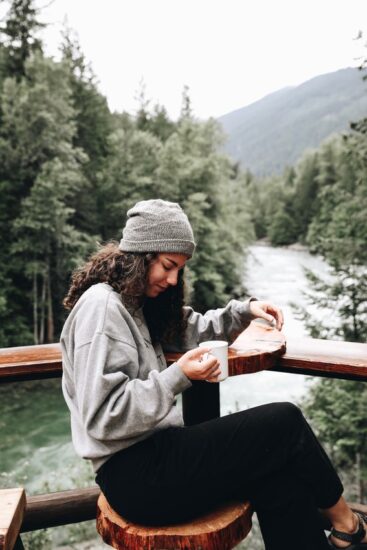 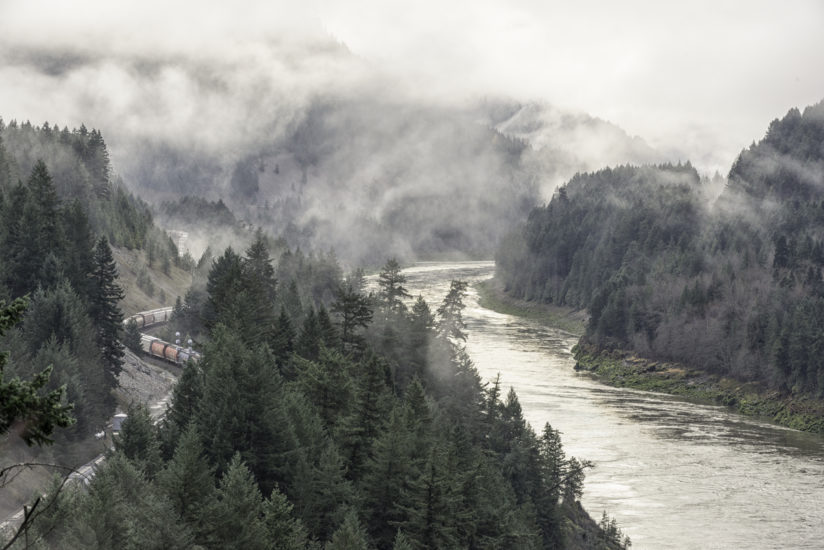 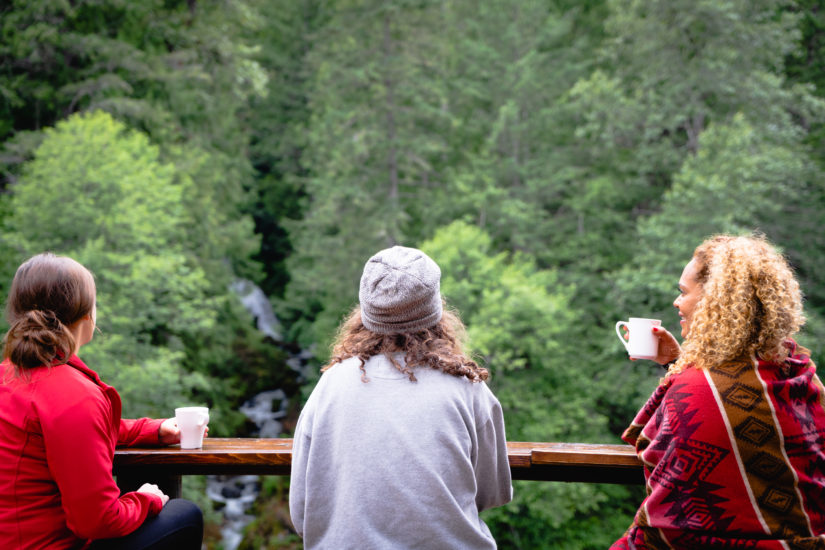 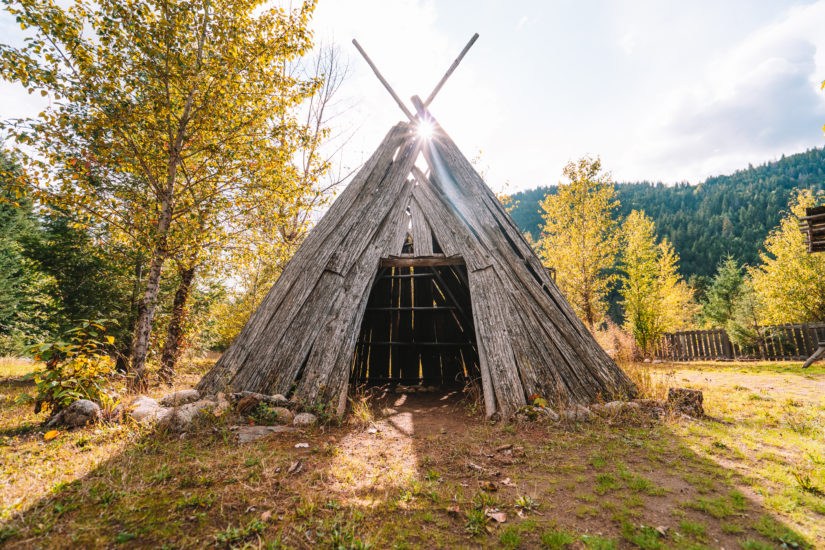 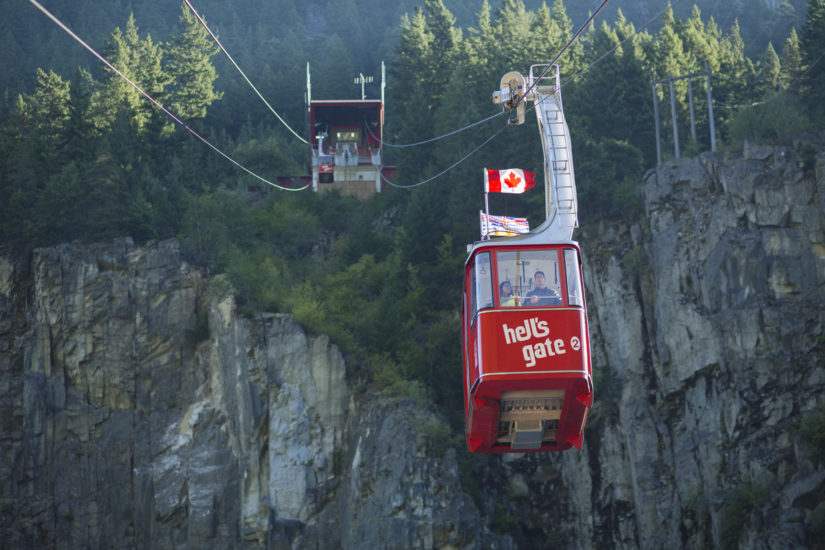 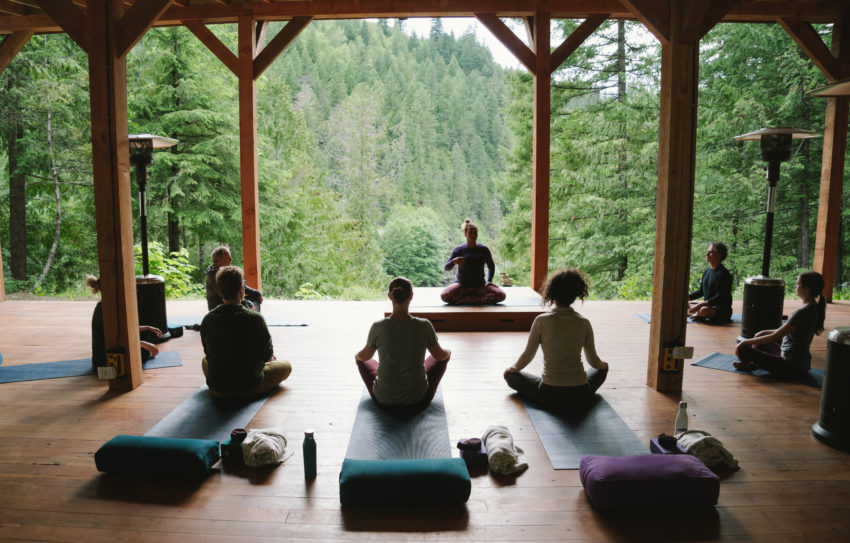 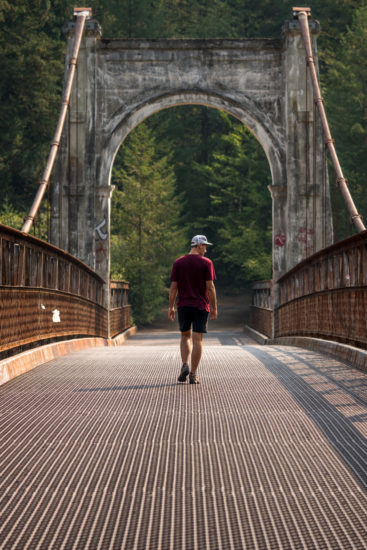 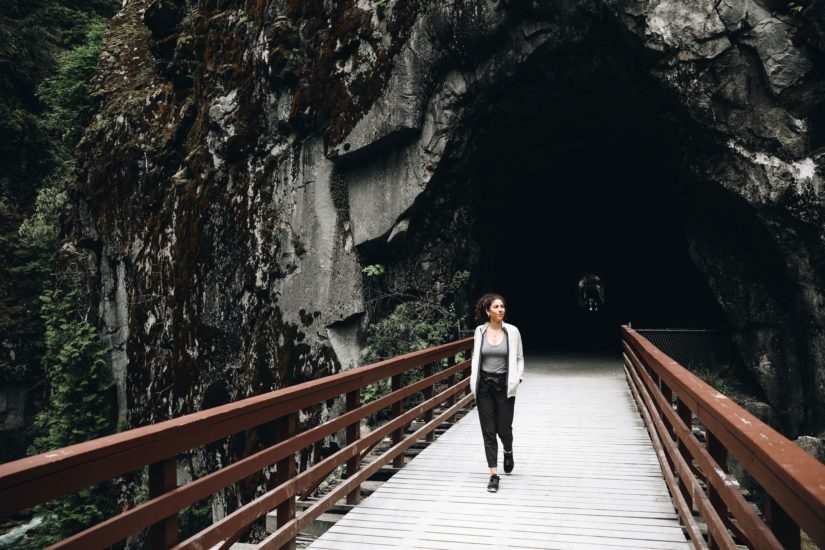 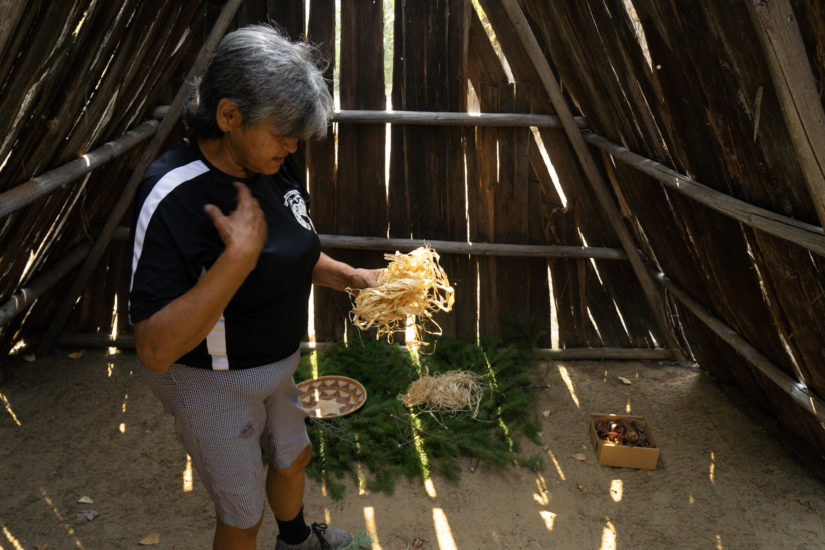 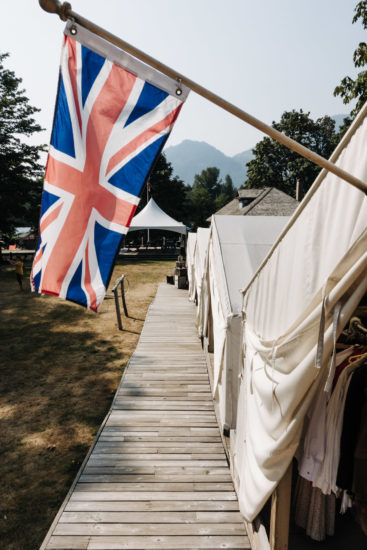 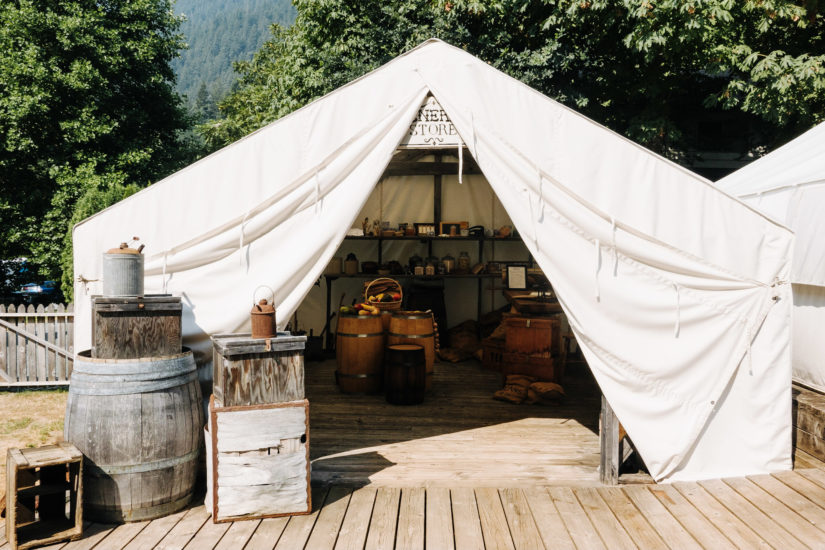 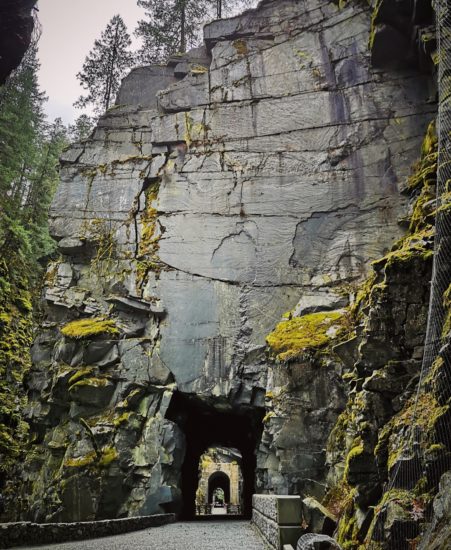 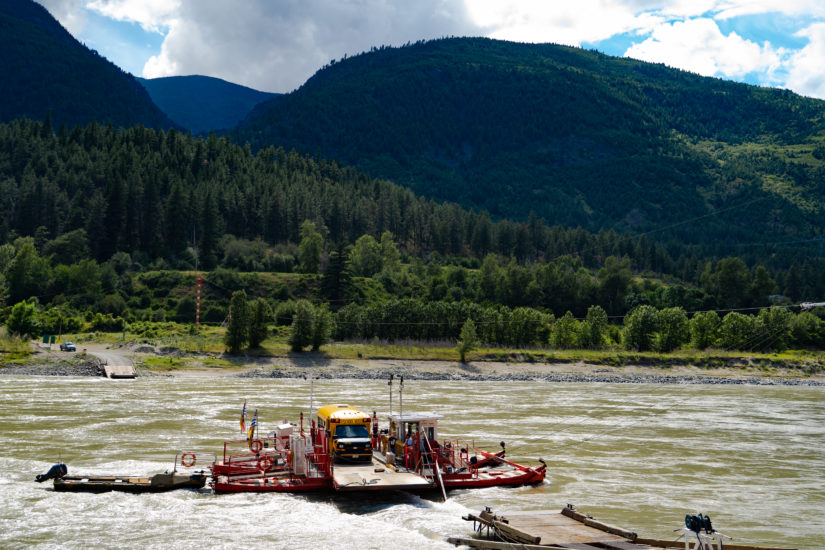 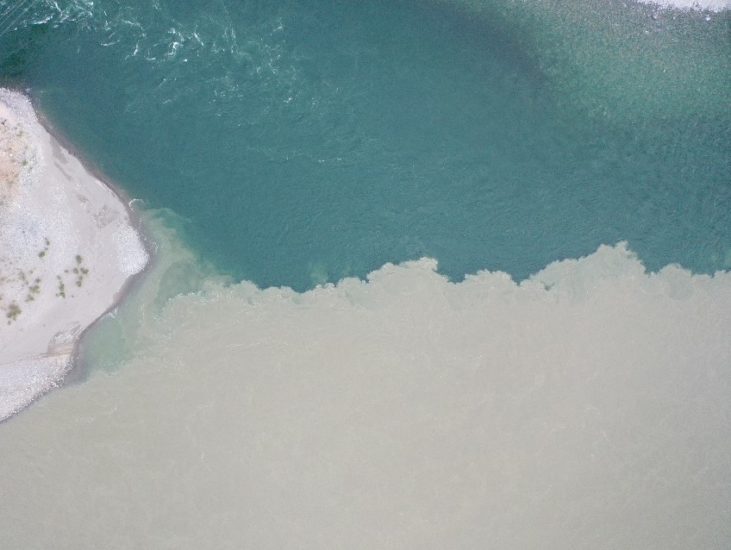 Confluence of the Thompson and Fraser Rivers | Tyler Cave

The Fraser Canyon is one of BC’s most scenic drives.

As you near the end of the Fraser Valley in Hope, the highway splits into two main routes north. These days, most people take the Coquihalla, but in the past, Highway 1 through the Fraser Canyon was the main route into Central and Northern British Columbia. Today, driving through the Fraser Canyon might be the road less travelled, but it is certainly one of BC’s most scenic drives, offering stunning vistas, trails and points of interest along the entire canyon. The mighty river below and the path of the Canadian Pacific Railway make this route well worth it. Travel the Fraser Canyon, and you will find year-round exploration opportunities and chances to learn more about the history of the area that has been well preserved in multiple historic points of interest and Indigenous tourism experiences that lie along this portion of the Gold Rush Trail.

For 10,000 years, Hope’s place at the confluence of the Fraser and Coquihalla rivers has made it a natural stopping point and meeting place for the Stó:lō (STOH-lo) Nation. European settlement began in earnest following Simon Fraser’s 1808 journey down the Fraser River and the Hudson Bay Company’s 1848 establishment of Fort Hope. When the Fraser River Gold Rush started in 1858, Hope enjoyed prominence as a gateway to the riches of the Fraser and, later, the Cariboo gold fields. Hope is nestled between the Coast Mountain Range and the Cascade Mountain Range and remains a gateway to the beauty of British Columbia’s interior. Today, visitors can travel north on Highway 1 along the Gold Rush Trail to closely follow the historic Cariboo Waggon Road as they wind their way through Sto:lo and Nlaka’pamux territory, past historic gold claims, and along the Fraser River which arguably gave birth to modern British Columbia. 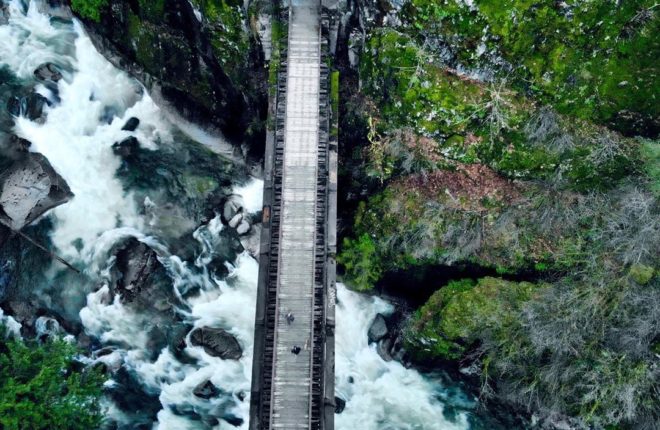 2
Yale Historic Site
Located within the Traditional Territory of the Stó:lō Nation

Originally established in 1848 as a Hudson’s Bay Trading Post, the small town of Yale grew to an estimated 30,000 people during the 1858 gold rush; then the largest city north of San Francisco and west of Chicago. The Chinese were among the earliest new arrivals to Yale, beginning with the Fraser River Gold Rush in 1858. Yale’s Chinatown was situated at the east end of town and was self sufficient with its own merchants, physicians, commercial establishments and cultural and political societies. In the 1860s, with the construction of the Cariboo Waggon Road, Yale became the terminus for one of the largest sternwheeler routes in North America. As well, in 1863, the Alexandra Bridge was built and connected the Cariboo Waggon Road and Fort Yale to south of the Cariboo Gold Fields. During the 1880’s Yale was the construction headquarters of the Canadian Pacific Railway. 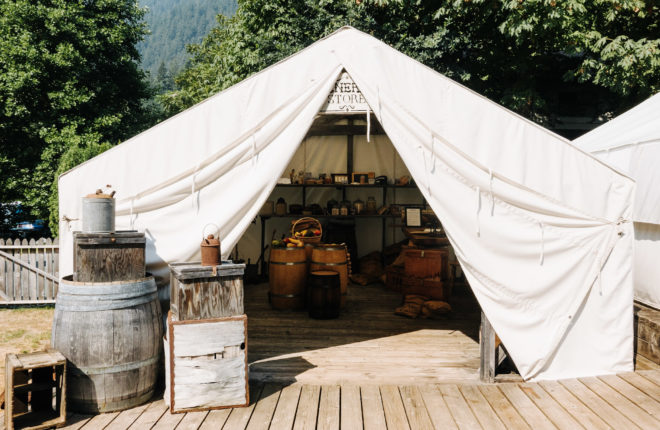 (Please note: The Old Alexandra Bridge and access trails are closed for conservation projects starting Monday, April 25, 2022 and are expected to last until September 30, 2022.) Declared the “eighth wonder of the world” when it was completed in 1865, the waggon road played a key role in the gold rush economy of the 1860s, and in the development of the new colony of British Columbia. When arriving at Alexandra Bridge Provincial Park in the Fraser Canyon, take a short walk to the Alexandra Bridge perched over the spectacular Fraser River. Originally constructed in 1863, the bridge was part of the Cariboo Waggon Road that connected Fort Yale and the south to the Cariboo Gold Fields. The area has been used and inhabited by First Nations for over 9,500 years. The first European visit to this area did not occur until Simon Fraser’s expedition passed through the region in 1808. The first permanent trail, the Anderson Brigade trail, was established in 1848 and subsequently, the original bridge was constructed in 1861 by Joseph W. Trutch and named after Princess Alexandra of Wales. To recover the $45,000 construction cost for the 90 m bridge, a toll of $7.40 per ton was charged. Today a second bridge, built in 1926, sits on the site of the original bridge which was dismantled in 1912. Just upriver of the bridge, there was once an important village called Kequeloose that was supported by the Fraser River’s abundance of salmon. From the bridge, you can see Nlaka’pamux fishing sites or fishing rocks along the rocky walls of the canyon that have been used for thousands of years to catch salmon. 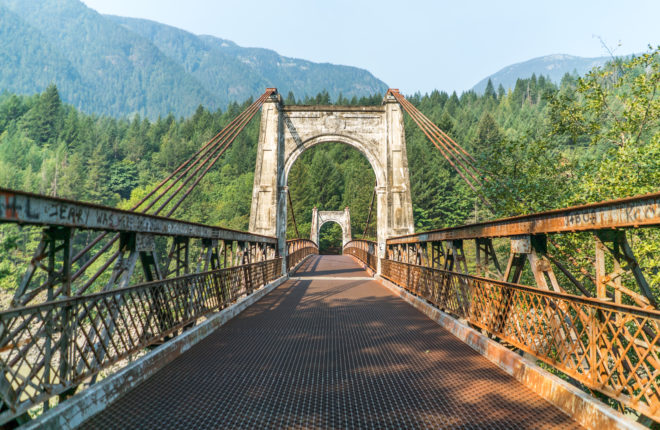 Less than 2.5 hours from Vancouver is the deepest, most dangerous and fastest-moving section of the Fraser River; looking up you will see sheer rock faces and down below you can witness the river smashing its way through a constricted channel. For centuries, this narrow passage has been a popular fishing ground for the Nlaka’pamux Nation. Simon Fraser, the first European to explore the region described the gorge as “the gates of hell,” after he and his men inched their way along its cliffs in 1808 using rope ladders made by their Indigenous guides. Today, Hell’s Gate is one of the province’s most unique and popular draws with the site being fully accessible and pet friendly. 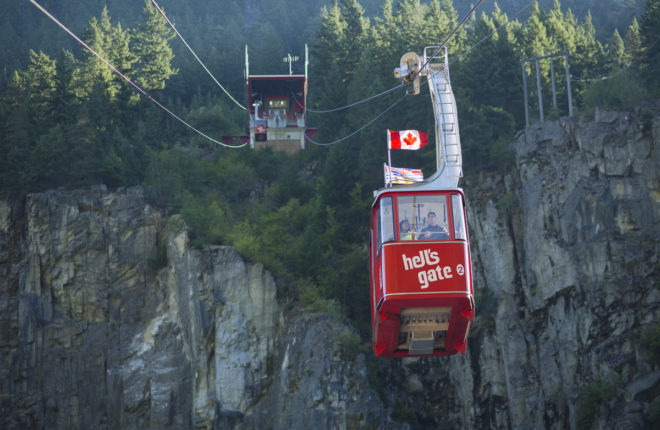 Tuckkwiowhum (Tuck-we-ohm) is located just 5 km south of Boston Bar and is a spectacular Nlaka’pamux (ing-khla-kap-muh) heritage site and village. The area was given its name by local Nlaka’pamux people, which translates to “great berry picking place” in English. The rolling hills still boast lush forests with wild huckleberries, blueberries and medicinal plants that are vital to the indigenous people living in the Fraser Canyon. Tuckkwiowhum Heritage Village was inspired by the local First Nations desire to preserve and share the deep spiritual connection to the land and the teachings of the Nlaka’pamux people. Whether you’re looking for a peaceful weekend getaway, a quick stop on the way through the canyon, or to immerse yourself in the rich lifestyle and culture, you’ll find what you’re looking for at Tuckkwiowhum. Be sure to call (604) 867-9107 and book a guided tour in advance. 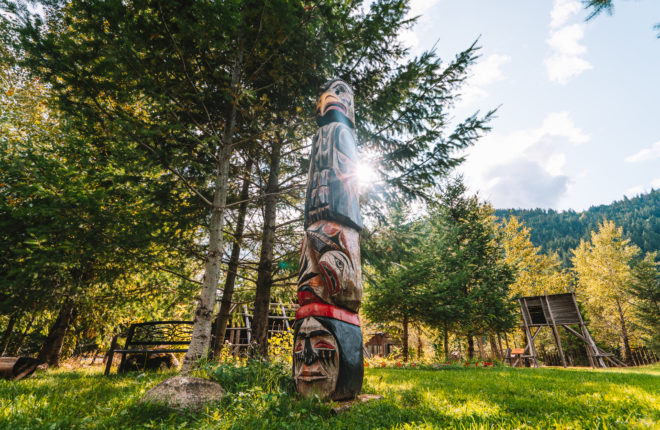 From Hell’s Gate travel north about 10 minutes on Highway 1 and you will arrive in Boston Bar, a town that got its name from the large number of gold-seeking Americans from Boston which local Nlaka’pamux (Ing-la-kap-ma) First Nations called the “Boston Men”. The original settlement in this area was the First Nations’ village of Koiaum, located on the west side of the Fraser River. Directly across the Fraser River from Boston Bar is North Bend, which only became accessible by road in 1986, when a bridge was built to replace the aerial ferry. Boston Bar is the gateway to the Nahatlatch River Valley, Skuzzy Creek, Anderson Creek and North Bend area. 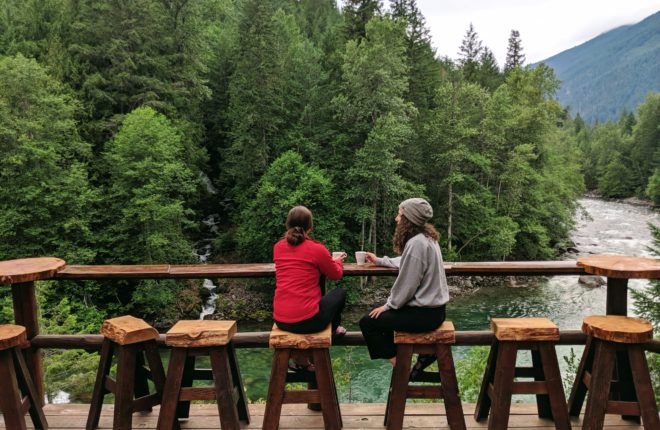 7
Lytton
Located within the Traditional Territory of the Nlaka'pamux Nation 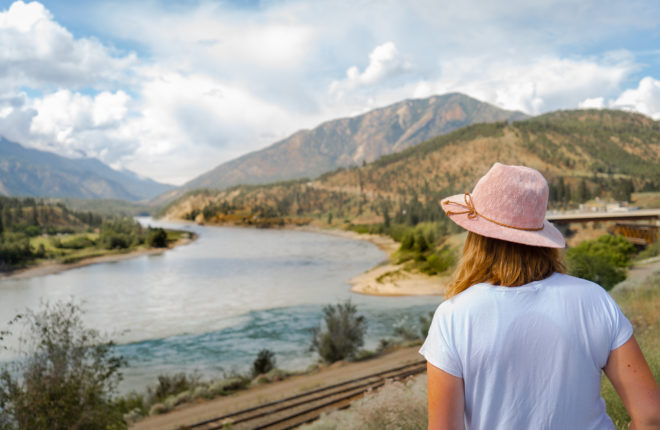